Nice work finishing the game! Like others have said, the UI is odd, but can't find any other problems, though I kind of miss the ability to shoot the meteors with right click ;). I can barely get 40 seconds... not sure if the browser version is lagging (I didn't notice it) or I'm just bad. The zip version was "unreadable" so I couldn't try it.

Thanks, I hope you enjoyed it even with the hard gameplay :P Oh, I didn't know it was unreadable, I have a mac myself so couldn't test it, thanks for the feedback and thanks for playing though! :D

Interesting gameplay i like the idea of risk/reward by allowing the meteors to enter on the atmosphere to give better burst damage.

The controls are intuitive and easy to use from a touchpad as well, probably an open idea for mobile game as well, i wish there was more animations on the space ship and the planet, also bit of random elements on it like different speed or size of meteors that may require the player to change his strategy during the gameplay, the designs and the explosions effect are really satisfy to see , music and sounds makes everything really relaxing and enjoyable to play.

main menus are a bit too static but not a big deal :D

keep making games like this one i love it!

Thank you for playing! I'm glad you enjoyed it, I never thought about this being a mobile game but that could be really fun indeed, I should look into that. I have set the speed of the comets to be random but I guess I should have maked more visual and more clear randomness, and yeah menu's and UI really isn't my strong point, but hey, that's a challenge for next Jam...

Thanks for the feedback! ^^

I like the art style although the menu could use a bit of polish. The gameplay is well balanced and I love the addition of the meteors disintegrating upon entering the atmosphere.

Thanks for playing, I'm glad you liked it :D Yeah I tried something different for the menu but it seems like it wasn't a success :P better luck next time, thanks for the feedback!

Really nice art work, i like games with cartoon style

I like a mechanic with explotion of asteroid. Thats really cool!

Just one problem: menu. Thats black styled, and its looking bad. But its not matter

Thanks for playing, I'm glad you like the art and the gameplay :D I wanted to try something different for the UI and Menu but yeah, that didn't work out apparently... And that's a really good time btw, thanks for the feedback! 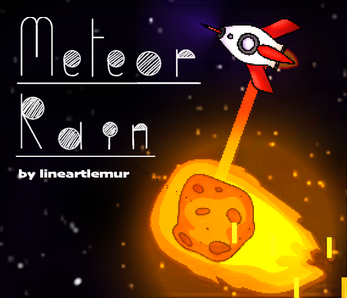 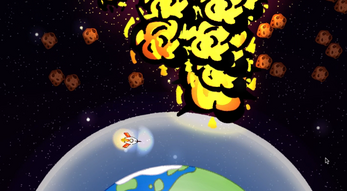 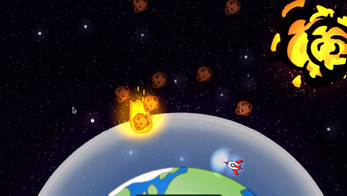 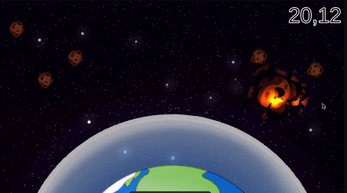 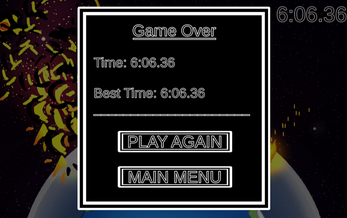